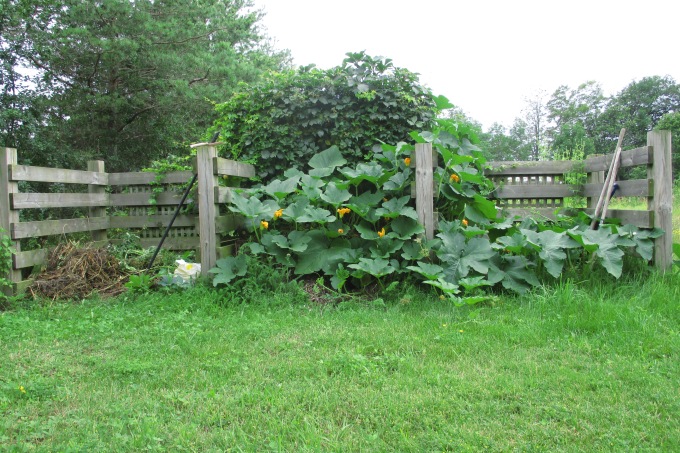 I’m seriously serious about composting.  Almost the first thing we did after buying our Prince Edward County property was build this huge compost bin.  I think I had seen something like it on a BBC gardening show.  I think we had fantasies of being able to drive the shovel of a small garden tractor into the bins to turn the stuff over.  No more using shovels or pitchforks for me.

The system works, in its own way, like a charm, (my) manual labour involved notwithstanding.  There’s no water where it’s situated at the back of the field so it generally takes longer for plant material to break down than it did in my small city black plastic with a lid composter.  But that’s OK because I have three bins to work with.

The first year I pile new stuff in one bin, filling it to the top by the end of the season.  The next year I start fresh with the next bin and let the first  just sit there, using a heavy fork to turn stuff over every now and then, to get air to the bottom of the pile.

I start the third year by screening the first year’s material – dumping finished compost in the third bin, and putting the unfinished stuff in the second bin to continue breaking down.  This leaves me with the first bin empty and ready to use.

Sounds complicated but it’s not.  Until this year.  Mid May something sprouted in the middle bin. Now, a lot of things sprout in the compost bins — tomato seedlings, Rudbeckia, various weeds, garlic, Virginia Creeper…but this one plant seemed to have strength and purpose.  It became large very quickly and was obviously some sort of squash so I left it alone.  I like squash.  And I loved the huge leaves this vine produced – so much larger than the leaves of anything I had ever purposefully planted!  And by mid July it was obvious – it was a pumpkin vine. I had grown pie pumpkins last year and one seed survived the winter.

So now I have a withering vine (it is August after all, and it’s been rather dry the past few weeks) and six good sized pie pumpkins growing.  And I notice, on Saturday, a large burrow going into the middle compost head, directly under where the pumpkin sprouted.  It looked like it could have been made by a skunk or a fox, hopefully not by a rat!

On Sunday I went out back to dump kitchen scraps and the whole centre of the compost pile had been torn out.  There, in a hole in the middle, was this.  I very quickly left the immediate vicinity.  And spent the day puzzling about what creature in our back field was brave enough or big enough to attack such a huge nest.