More than three weeks left in summer.  Officially.  But with days getting noticeably shorter and temperatures several degrees cooler than average (single digits when we got out of bed yesterday – Shileau came down the stairs with me but then just curled up on the couch!) it really is beginning to feel a lot like autumn.

To emphasize that point, I harvested my first pumpkin on Saturday – one of the half dozen growing in the composter.  (I need to find a recipe that uses pumpkin and puff pastry…)

Here’s what’s going gangbusters in my garden now along with a few just starting, a few new to me and a few trying to hang onto to their mid-summer glory. 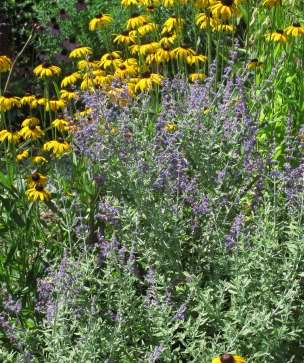 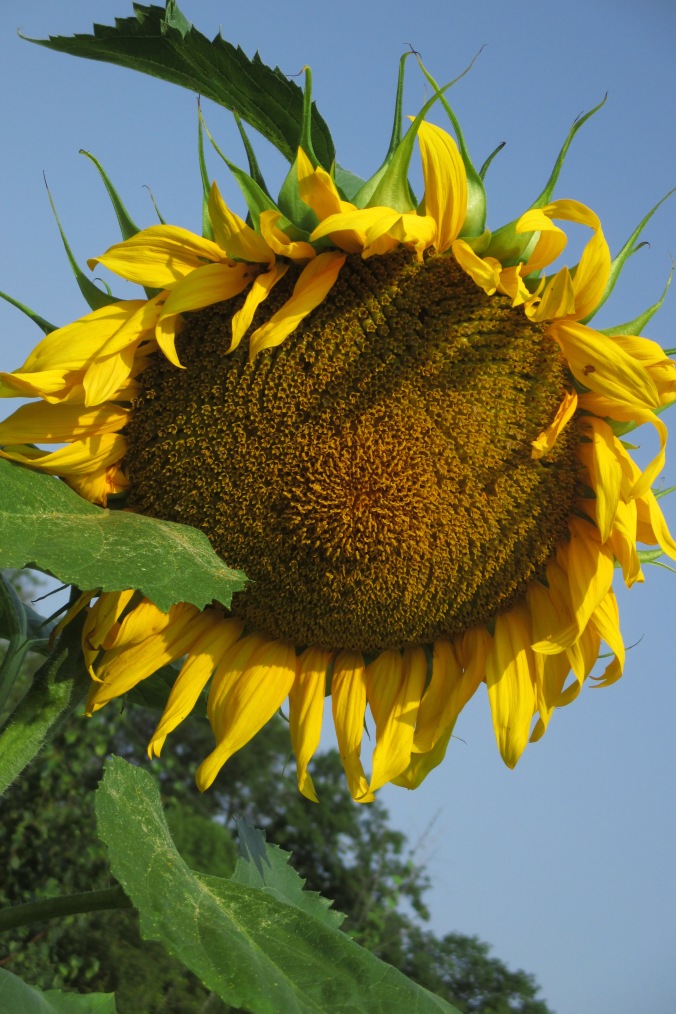 I spot great heaps of Russian Sage (Perovskia atriplicifolia) everywhere but this is the first year my one plant has given me any kind of display.  The Cup Plant (Silphium perfoliatum) I’ve written about is now in its eight foot glory and the Sunflowers (Helianthus annuus) are magnificent – both the few I planted (above) and the ones that found their way into my garden from plants a year or two ago — some appear to be small trees, 10 or 12 feet high.

New to my garden this year are these white Iris given by a friend.  They bloomed profusely in the spring and now they’re sending up a few, select, stalks to provide welcome contrast to the lush greenery everywhere.  I brought this Sneezeweed (Helenium autumnale) home from my visit to the native plant nursery in July.  It had a bit of mildew then and is now covered with it yet still has given some remarkable, small, flowers.  Hopefully next year the mildew will stay away. 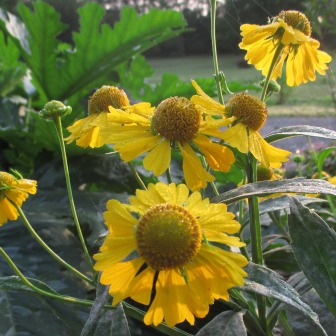 Just starting are Sedum specabile – even before it starts to pink up it gets swarmed by bees:

Although not really a flower (although one bolted early on so yes, there were flowers…) I’m including this kale – I’ve never grown it before and am entranced by the curly, crinkly foliage – so much so I’ve not been able to cut off any leaves to eat:

Finally, still going strong, are my Rudbekias.  Once again here are two photos of Rudbeckia laciniata, the first paired with Ironweed (Vernonia fasiculata), another Ontario native.