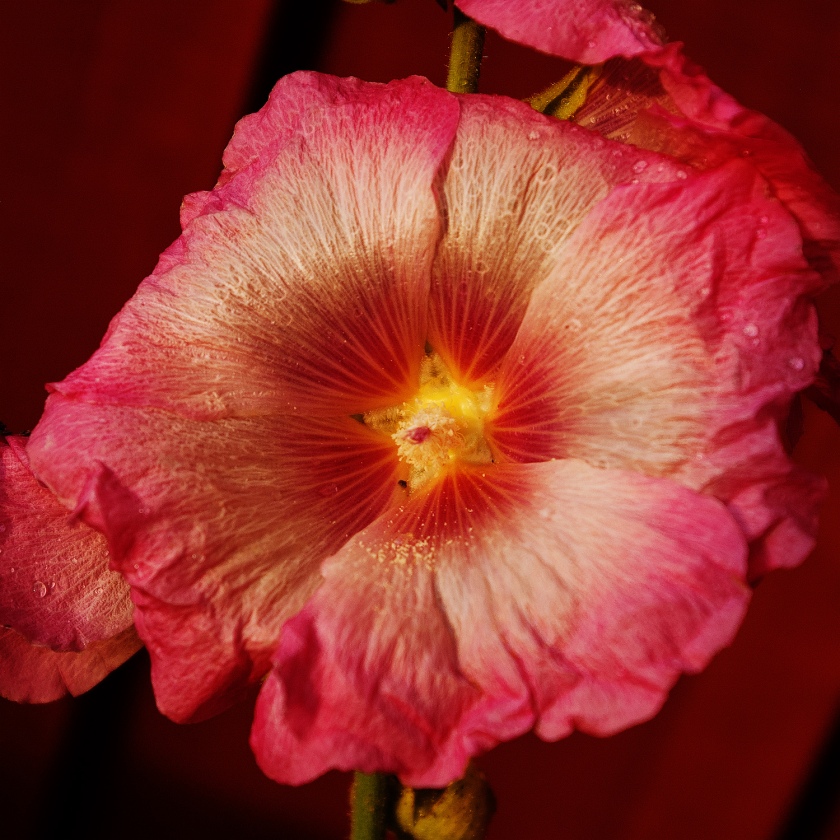 In late summer, 2017, we sat on the back steps, pulling apart hollyhock seedheads, spilling seeds into a old coffee tin for later sowing, planting and giving away. Needless to say, a lot of these seeds wound up in the gravel and grass around the back steps instead of in the tin. They’ve been germinating ever since, and I’ve been kept busy pulling them out or mowing them down.

Except one patch, which sprung up right next to the steps where I ignored them. Last year a large rosette of leaves formed and this year up sprung a dozen stalks, all bearing gorgeous pink flowers.

Sadly, they’re too close to the steps, and our geriatric, mostly blind lab has had difficulties navigating through the foliage. Yesterday morning, I took out the Felco’s and chopped most of the five foot stalks down. The results are In a Vase, on Monday.

These hollyhocks, Alcea rosea, are native to Asia and Europe. Here in the eastern part of North America they are commonly seen along roadside ditches, in cottage gardens and in many rural areas. It’s a biennial, growing rosettes of large round leaves the first year and throwing up a tall flower stalk the second. A patch of hollyhocks can be self sustaining if you let them go to seed and then either don’t cut the dead stalk down or cut it but leave the stalks and seedpods where they fall.

Notorious for developing the unsightly fungus called rust – (Puccinia heterospora) – I find some years (like this year) it’s not so bad, some years (like last year) it was everywhere, and I was cutting and burning a lot of rust infected leaves. The internet says rust appears when it’s too wet, but the internet also says you need moist soil to grow them. Hmmmmm

To see more flowers arranged in interesting and beautiful vases, click on over to Cathy’s site, Rambling In The Garden.