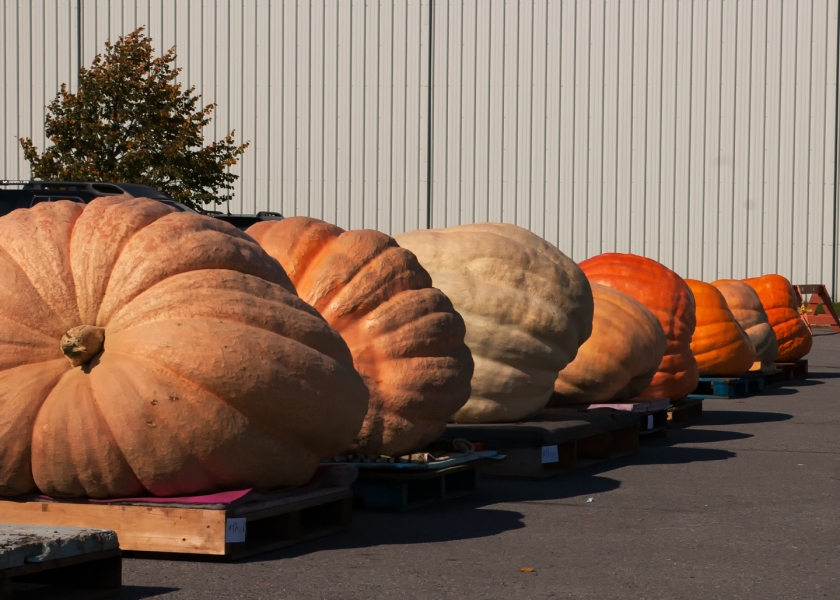 This past Saturday was to have been the 24th annual Pumkinfest here in Wellington, Prince Edward County. Usually the day starts with a pancake breakfast and continues with lots of music and dancing, kids and family events, lots of vendors (including the always sold out, famous, Hillier Women’s Institute Apple Dumpling sale), a parade down Main Street and, the highlight of the day for many, the Giant Pumpkin (and other giant vegetable) weigh-off, conducted by the PEC Pumpkin Growers Association. Here’s last year’s jammed-packed schedule of events.

The whole idea of having a Pumkinfest came about when, in 1996, the late Bill Greer grew the world’s largest pumpkin, which weighed in at 1,006 pounds. (His record didn’t stand for very long; another pumpkin tipped the scales a few hours later in Lowville, New York, at 1,061 pounds.) The festival has grown over the years and now it’s (usually) the biggest fall event in The County. If you’d like more details about the history of this festival, just click on this link.

Main Street in Wellington and the surrounding parks and parking lots are always chock full of residents and tourists enjoying the day. This year, of course, is different and festivities were cancelled. Except the Giant Pumpkin (and other giant vegetables) Weigh Off. Farmers and kids in the County and beyond still grew giant pumpkins this year and the Pumpkin Growers Association decided to continue with the weigh-off. It was held in the parking lot of the community centre/arena, with competitors coming in one entrance and spectators driving in another, and either staying in their cars to watch or, since the weather was fine, meandering about, everyone keeping their distance, everyone masked.

Giant pumpkins are a lot larger today than 24 years ago. The Canadian record is now 1,959 pounds, while a grower in Belgium grew one that was 2,624 pounds! Seeds from award winning fruit can sell for as much as $10 a packet and they need LOTS of water if you’re thinking about trying to grow one yourself.

Weighing a giant pumpkin is not a simple task. It takes machinery. A wood pallet. A whole crew of guys to make sure the hefty fruit (yes, it’s technically a fruit) is stable enough to move to the scales.

As for the giant vegetables, some were recognizable, others, to me, were not!

There were sunflowers as high as an elephant’s eye, tomatoes as round as the moon in the sky, plenty of plaid and a bit of fun to be had. It was a great afternoon to be outside in the fresh air – here’s hoping next year’s Pumpkinfest will be a bit more ‘normal.’