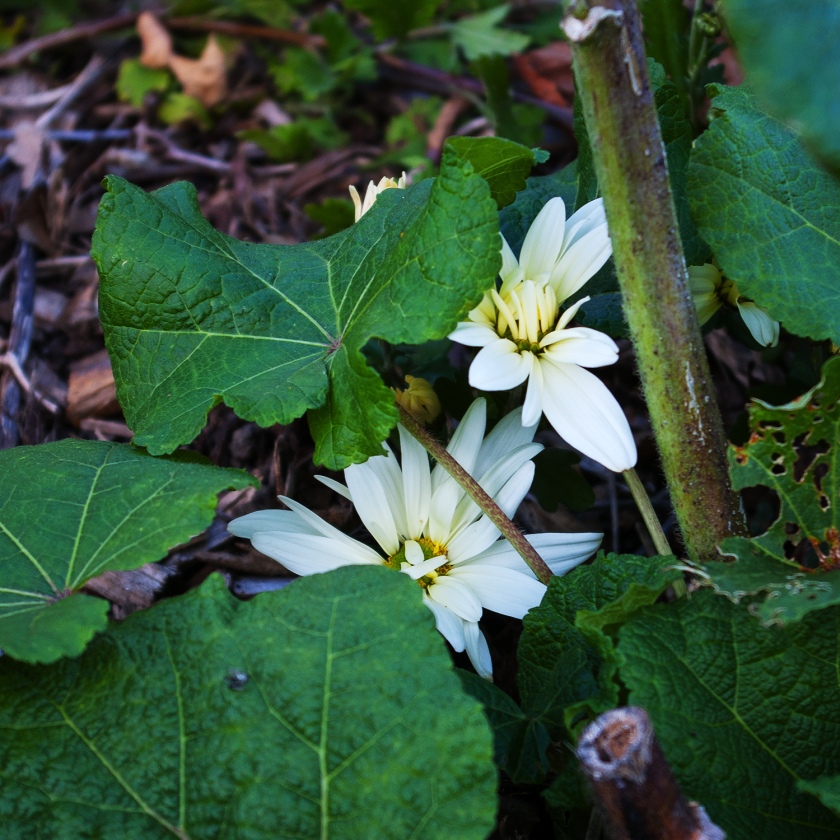 One of the neat things about a garden is discovering the unexpected. Germinating a seed that becomes something altogether different than what was pictured on the label. Planting a perennial that comes in a 10 cm pot only to have it, three months later, tower to more than a metre, totally shading everything around it. Planting Vinca minor – on purpose, because the pictures of the flowers were so pretty. Ugh! Or, Cross pollinating your own Hemerocallis to discover a entirely new shade of pink. Often these surprises don’t appear until the end of the growing season – such as a few of my Six today.

1 – This Chrysanthemum, pictured above and here. It started life in a small pot, given me after Christmas by a friend departing for warmer winter climes. It was bedazzled with sparkling…things…and looked very embarrassed and frankly, more than half dead. I nurtured it through winter, pinching the lone surviving stem several times to encourage multi-branching, then planted it out in May. A hollyhock seed decided to germinate right in front of it and, as hollyhocks do, grew very large basal leaves, almost totally obscuring the small Chrysanthemum. Then, lo and behold, earlier this week, I spotted a couple very large white flowers peeking out from under the hollyhock leaves! (Doesn’t this sound like a children’s story?) I’m hoping for a delayed hard frost so that all these other buds, on other stems, will have a chance to open also.

2 – Another surprise has been how this German Chamomile (Matricaria recutita) has come back to life after I cut it way back after it bloomed this summer. A friend said I should have harvested it to dry and make tea, but I didn’t do the research so don’t know if it’s the flower, the leaves or the root that needs to be dried.

3 – You can see the chamomile is growing next to Nasturtiums. I know I had Nasturtiums just three or four weeks ago but hey, can you ever have too many Nasturtiums? Especially when they provide a very pleasant surprise for me this year. I planted seeds, they sprouted and grew, a lot, then one day they were gone. All that was left was a sea of stalks, denuded of leaf or flower. Like a mini forest of dead things. I cut back the stalks but left the roots, and a funny thing happened. They grew again! Tiny leaves appeared, then larger ones, then flowers that, to my eye, are even more vibrant (and tastier) than the first batch. Alas – this patch must soon go, frost or no, since I need to dig up the Calla lily bulbs I have coming up amidst them. If I don’t get the bulbs now I’ll not remember where they are.

4 – Veering out of the kitchen garden I found another surprise – this tall stalk with a few pretty yellow dandelion-like flowers on top. I remembered reading abut a similar flower found also unexpectedly, in a fellow SOSer’s garden last week (See this post from One Man and His Garden Trowel). He thought it was a sow thistle and, when I looked it up, I believe that’s what this is as well. A weed! Gasp!

5 -Even further afield is this ornamental grass. I chopped this chunk out of the ground in early spring (literally – chopped with a sharp spade as the roots are so tough and dense) and transplanted it to a spot I can see from the dining room window. The parent plant grows to about two metres but, surprising to me, this offshoot hasn’t surpassed 60 cm. The transplant shock, I imagine, or not enough water its first year. Nonetheless, I really like how the late afternoon sun encouraged the soft yellow, autumnal glow on the grass blades.

6 – Finally, what may be my final Colchicum shot of the year. Nothing surprising or unexpected here. I call this photo ‘Fallen Flowers.’

That’s it for me this week. Hope y’all have a swell weekend in your gardens! If you’d like to see more of these Six On Saturday collections, from gardens around the world, check out The Propagator’s site!